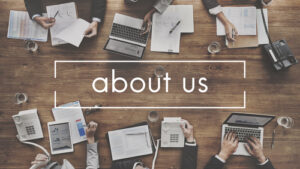 The color red for the blood of Christ, purple for the royalty of God’s Kingdom, yellow for the power and presence of the Holy Spirit, and white for the innocence and blamelessness that we have before God as a result of the other three.

The cross in the center represents everything we do at Word of Hope Ministries, which is centered around the message of the cross.

The square represents the four corners of the earth we wish to reach.

The dots and arrows circling brings everything together and portrays the various ways we want to reach out with the Gospel to Christian Indigenous People and those who are willing to learn more. 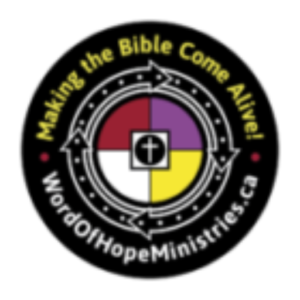 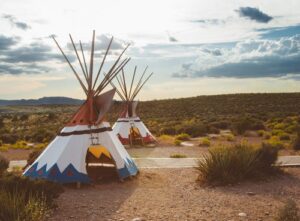 3. Meet Parry and His Wife

Parry Stelter is originally from Alexander First Nation and is happily married to Angeline Stelter. Angeline is originally from Paul First Nation. They were married in the year 2000 and have found they have a lot in common. They were both adopted off their reserves and grew up in Christian families. After living according to the world, they gave themselves more fully to building the kingdom of  God and living more for Jesus based on the truths of scripture.

Angeline currently drives a semi-truck with a class 1 license while supporting Parry in every area of his life, as Parry in turn supports her in every area of her life. Parry has a Bachelor of Human Justice Degree, and a Master of Divinity Degree. He is currently a doctoral candidate in the Doctor of Ministry Program in Contextual Leadership through Providence University and Theological Seminary.

The purpose of Word of Hope Ministries is to show the truth of the Bible to our Indigenous people and people of the north across Canada. Showing how the Bible can come alive for study and for everyday living. This will be accomplished through the internet, printed publications, videos, and public speaking engagements in Indigenous and non-Indigenous communities. This purpose is also connected with Romans 15:13, which says, ” May the God of hope fill you with all joy and peace as you trust in him, so that you may overflow with hope by the power of the Holy Spirit.” (NIV) Our purpose is to give hope where hope has been lost or never found in the first place within a Christian context and according to scripture.